This is the HP Spectre x360 13-inch review the 2-in-1 laptop you may wanna know about. Coming with an elegant design a great battery life as well as the performance you want your laptop to have, the late 2019 version of the HP Spectre x360 is what we are talking about today. 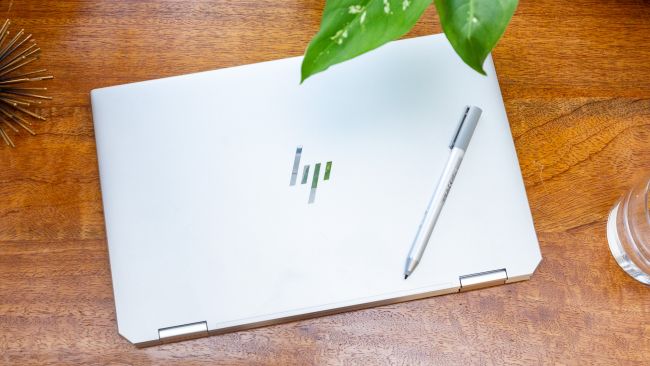 If display quality is what matters to you more than laptop’s battery life then you might go for a 4K OLED model that has intel core i7 CPU, 16GB of RAM and a 512GB SSD that will cost you a sum of $1,499.The storage option for this model goes all the way up to a 1TB configuration that will cost you $1,699, which is still pretty good than compared to MacBook Pro 13-inch 2020 as well as the Dell XPS 13 2020.

This time the Spectre x360 has big changes in its design and aesthetics. The laptop is now more elegant and appealing and the form factor has reduced as compared to the previous version of the HP Spectre x360 13.

The Spectre x360 now has slimmer bezels without compromising on anything rather than speakers more on that later. How did HP make their bezel this time around? Well, first of all, they have created the world’s smallest IR webcam (2.2 mm), which fits on the laptops razor-thin top bezels. Also, the Spectre x360 uses and Ethernet-style drop mechanism to house a full USB-A port, and inlets for air were made bigger to improve cooling. And due to which the top-firing speakers were shifted to the bottom of the laptop. 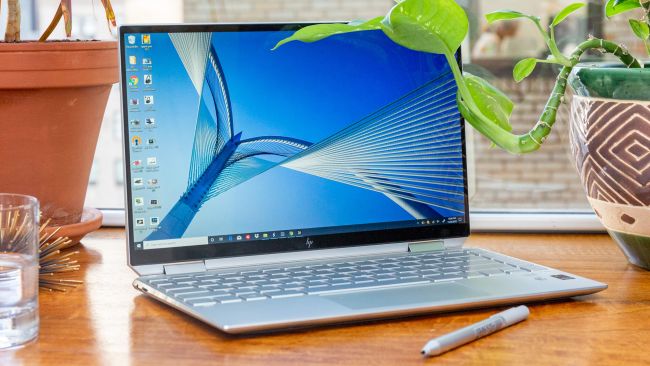 The new edge to edge display in the Spectre x360 enhances its elegancy and boy oh boy those faceted corners and those chamfered edges gives the laptop a look that no other laptop has. On the lid, there is a chrome HP logo that matched a pair of shiny-silver hinges.

Now let’s talk about the keyboard setup in this laptop. The deck on which keys are laid is silver that matches with the keys which are silver too and the touchpad rests below the keyboard. Now, most of the people praise the design of this laptop as its beautifully made.

The Spectre x360 has other colour options too like Poseidon Blue with brass accents and the Nightfall Black with copper accents. Both of them look amazing too.

As a 2-in-1 laptop, the Spectre x360’s flexible hinges let you position the laptop into the tent, studio or tablet mode too. The hinges are well-engineered so that the screen doesn’t wobble when you even tap it a little harder than usual.

First of all this laptop consist of USB-A port most of the laptops in this date don’t have one. You can connect a USB 3.1 Type-A cable whenever you need to in the Spectre x360. The drop-jaw design of the laptop has enabled to beautifully include this port in the laptop. But there’s a drawback to this design and that is you need to lift off this laptop a little up to use the ports in this laptop but I don’t think that much of a deal as anybody would accept to do that rather than carrying dongles. On the left side there lies headphone/mic jack, while the right side has two Thunderbolt 3 ports (one angled on the faceted corner) and a microSD card slot next to the webcam kill switch. You may feel that the positioning is a bit awkward for these Thunderbolt 3 ports. 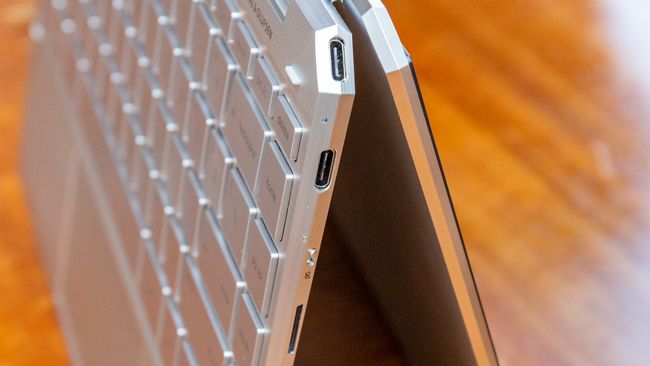 The Spectre x360 comes with two touch screen options: 1080p or 4k OLED. You might be confused about which one should you choose but unless you’re a professional that needs colour accuracy, then you will be good off without that OLED display because the 1080p panel is also good. The 1080p panel is vivid, detailed and not like the previous HP panels, this display gets bright enough too. Testing out the display of the Spectre x360 (1080p) the display is pretty sharp you can see almost every minute details about the picture on the screen clearly. The touch response of the screen is also on-point. The tablet mode on this laptop feels good because the touch response of the screen is that good. The Spectre x360’s display covers 109% of the sRGB colour gamut, according to our colourimeter. That is less than the XPS 13’s 113% .the previous Spectre x360 (150%) and the average laptop (123%).

Having an Intel Core i7-1065G7 CPU and 8GB of RAM, the spectre x360 performed well during the day to day usage. There were no lags and stutters while using the device every day for a week to surf the internet, stream my favourite shows and write down the blogs too. And one strain test I did which included opening many chrome tabs (15), and 4 of them played a 1080p video without any lag whatsoever. 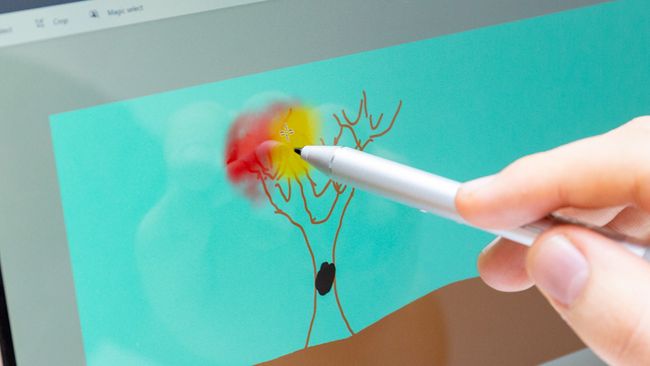 The two 10th Gen Intel CPU that HP gives in this laptop is the Ice Lake. This 10-nanometer chipset gives the Spectre x360 upgraded Iris Plus graphics but not that much powered as compared to laptops with available six-core i7 Comet Lake CPU like the XPS 13.

On the test, it took the Spectre x360 21 minutes and 13 seconds to convert a 4K video to 1080p resolution using the Handbrake app. Well in this test it outperformed the XPS(24:49) and the category average(21:41). The 512GB SSD isn’t the fastest one that we have seen around but it’s pretty fast and has a commendable speed too.

It’s not massive but the Spectre x360’s Intel Iris Plus graphic is a step up from the integrated UHD graphics found in most of the laptops. On the 3DMark Ice Storm Unlimited benchmark, the Spectre x360 scored a 107,453, which outranks the last-gen Spectre (90,977, UHD 620) and the category average (95,845). 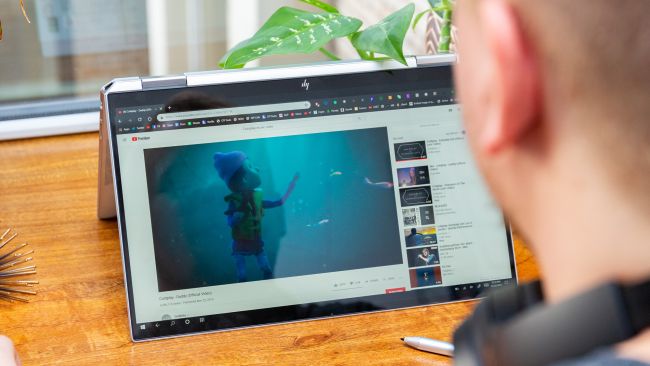 This laptop isn’t meant for gaming and you can play AAA tier games in this laptop but racing games like Dirt 3 ran at 47 fps which is the same as the XPS 13 too.

As we have said above the new design and small form-factor resulted in the sacrificing of the top firing speaker which are bottom-firing in this model. The new bottom-firing speakers are loud enough to fill a medium-size room but don’t deliver that much of sonic depth to the audio quality. The highs and lows of the speakers are pretty good but sometimes they are not as crisp and to be honest, the speakers from the previous spectre were far better than this one. And another problem with this laptop is that when at full volume while listening to treble-heavy music there is a harsh buzzing or rattling sound that you can hear. However, if the volume is kept pretty low at around 70% then the rattling sound will not be a problem.

The Spectre x360 late 2019 gets the same keyboard as the previous model and it is great. The keys here are large well-spaced and have a decent amount of travel for a laptop this thin. The keys are tactile and do provide a good feel when typing on them. 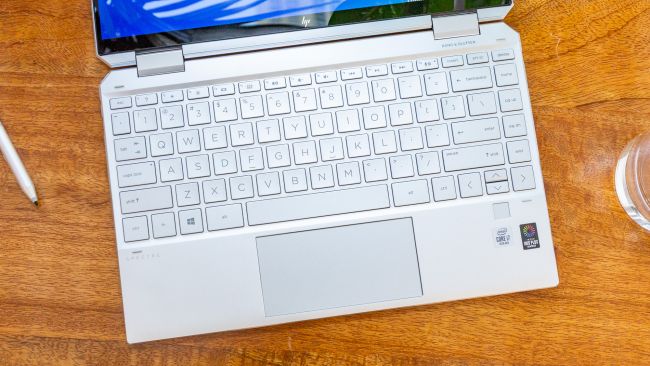 And the thing with this keyboard is that the letters in the keys are transparent and the keys themselves are silver in colour which doesn’t create that contrast for the writer to know immediately what key that is. But the font is pretty large and the keyboard is backlit which won’t make reading whats on the keys that big of a deal. But I don’t know why the spacebar isn’t backlit. 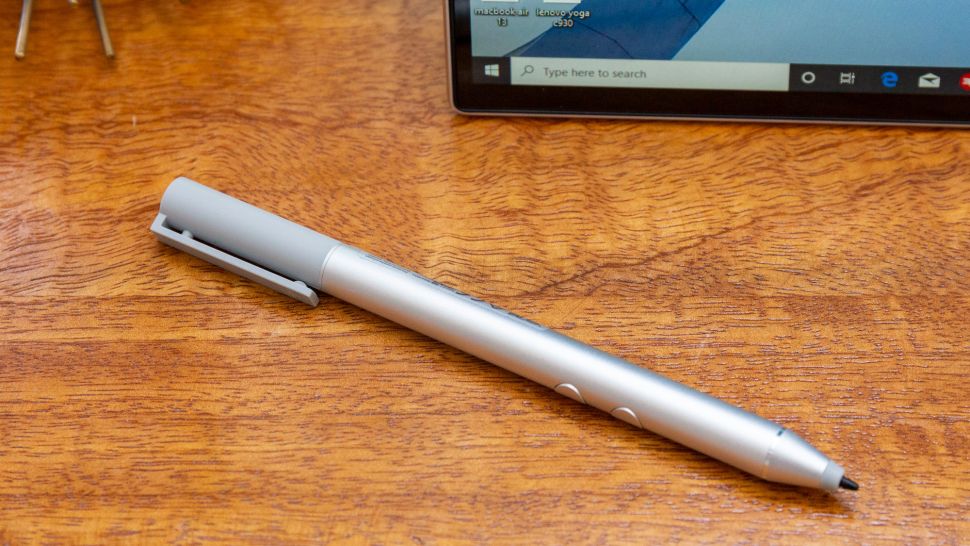 I typed 110 words per minute with an accuracy of 94% on the 10fastfingers.com typing test. And that’s great writing from me so I would give this keyboard a 10/10 rating. 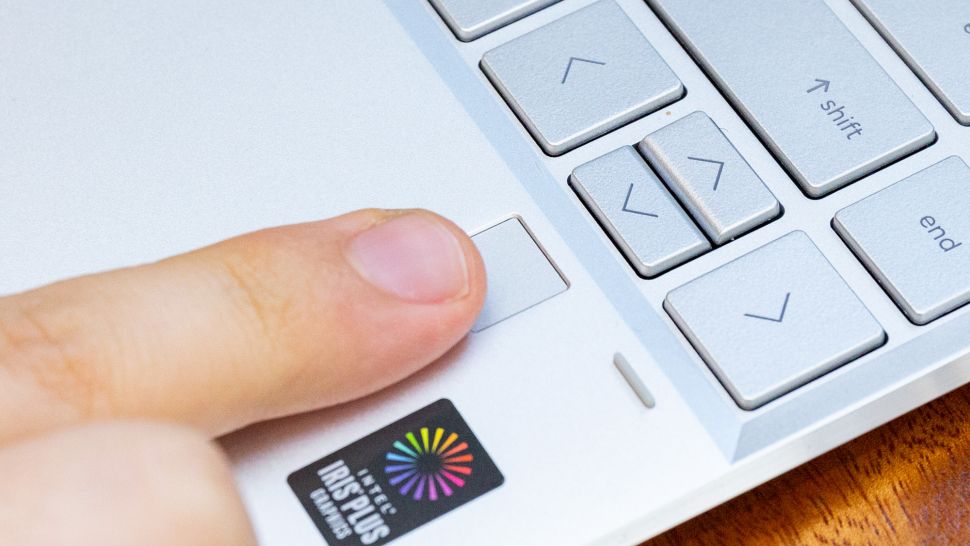 The Spectre x360 13’s 4.4 x 2.2-inch touchpad comes with windows precision drivers, which is widely considered an upgrade over the previous drivers(Synaptics). This time the touchpad is good which handled the faster-swiping actions and also performed windows 10 gestures including two-finger scrolling and pinching to zoom in. The trackpad is glass so it feels premium and is responsive too.

HP’s Stylus Pen (costs $65) and a leather sleeve is included with the Spectre x360. The stylus is also pretty good. It does its job pretty nicely.

The laptop will last you an incredible 13hours and 20minutes test done by laptop mag, which includes web surfing over wifi at 150 nits of brightness. By their comparison, the XPS 13 latest 10hours and 57 minutes and an average premium laptop last about 8 hours 37 minutes. Now this battery life that HP Spectre x360 offers is really impressive and despite having a smaller chassis it offers an extra 1-hour battery life over its predecessor.

You can’t expect more from a smallest 2mm webcam so it takes grainy images and videos as you may expect. If you need to have a great camera quality during your video call for your work then you might consider having an external webcam.

As mentioned above the Spectre x360 consists of a webcam kill switch so if you want the webcam to not work then you might turn on the kill switch and boom there’s nothing in the webcam. It is also a handy feature as hackers are hacking into people’s laptop and can see through webcam even without the consent of the laptop user, so using the kill switch cuts the power supply to the webcam and hence can’t be turned off except physically.

With a small form factor and a compact chassis, the Spectre x360 is more liable to heat more. According to laptopmag while playing a 15-minute video then testing the thermals by pointing the heat gun at various parts of the laptop, the touchpad’s temperature was 81 degrees Fahrenheit and the centre of the keyboard was 87 degrees that are below 95 degrees comfort threshold, the bottom panel near the hinge warmed to a concerning 101degrees. Though the spectre doesn’t overheat the laptop feels warm.

Spectre x360’s specifications are a 10 on 10 but the software in their messes it up. The laptop’s software is full of bloatware things like Farm Heroes Saga, McAfee Personal Security and Netflix and ExpressVPN which you need to pay a monthly subscription for use.

The Spectre x360 ships with a one-year limited warranty.

Well look the Spectre x360 13 is a pretty great laptop for the price and what it has to offer. It has a beautiful modern looking design and also is small and compact the performance and battery life also add up to its pros. But where the thing comes is about the speaker and thermals of the laptop. Though the speakers aren’t terrible they distort at the maximum volume. You can’t say they’re great either so you need to decide whether you want it or not. And regarding the thermals, that’s a compromise with the smaller form factor. So I would say the HP Spectre x360 is a pretty good choice if you have the budget.

There are other alternatives available in the market too. The 2-in-1 market has options one of the best of then is the dell XPS 13 but the thing with dell XPS is that the battery doesn’t last that long.