The digital oil & gas solutions business has had a difficult and volatile few years. In June 2014, the price of oil plummeted due to a number of important causes, including rising US oil production that resulted in an oversupply, declining demand from China and other developing nations, geopolitical unrest, and dwindling storage capacity for crude oil. The price of oil briefly fell below $30 per barrel at one time, and although though it has since rebounded and is again hanging around $50 per barrel, it is still significantly below the post-recession highs of over $115.

A significant reduction in spending by oil and gas corporations followed the price fall in June 2014. The dramatic decline in oil prices led to a dip in global spending on oil exploration and production, which dropped from $700 billion in 2014 to $550 billion in 2015. 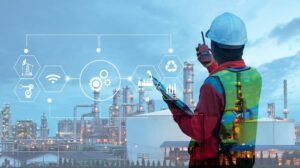 Finding new fields to explore became less important, and the emphasis shifted to increasing operational efficiency in already-existing facilities. This was made possible in great part by the oil and gas industry’s move to the digital age. To get the most value out of the resources at hand, technological investment was essential. Now, more than ever, it’s critical to maximize operational efficiency in the oil and gas sector by adhering to digital trends. This is true even though the price of oil has increased since hitting a record low.

Maintaining ongoing profitability is the oil and gas sector’s present goal, which will be largely accomplished through digitization in the sector. The 2016 Upstream Oil and Gas Digital Trends Survey found that 72% of industry experts view cost reduction as either an essential or the most significant concern that digital technology can assist address, and 91% report that they have already seen benefits from implementing new technologies.

Oil and gas firms can add value to their operations through digitization by cutting costs, enhancing decision-making, and raising employee productivity. When it comes to hiring and onboarding new staff, digital solutions streamline the process, allowing businesses to expand considerably more quickly and effectively.

The majority of oil and gas industry experts understand how important it is to embrace digital technology, yet leaders who want to implement digitalization within oil and gas organizations face a number of obstacles. Structure problems are one of the biggest hazards that businesses encounter. Organizational structures, value chains, and operational procedures are all disrupted by a company’s digitization. Although controlling this shift is crucial, it can be disruptive.

As a result, oil and gas companies need to show digital tenacity, which means investing in and embracing digitization.Strong and focused Successful businesses are built on strong leadership. The leadership of the organization must embrace digital developments in the oil and gas sector if they are to be successfully implemented.

Big data has long been a major focus for oil and gas corporations. Since the 1980s, they have led the way in the business in collecting massive amounts of data using sensors. But gathering data differs from comprehending it and utilizing it to the benefit of your business. Since data analytics talent can be hard to come by, many oil and gas firms struggle to realize the value in all the data they collect. According to the Upstream Oil and Gas digitalization Survey, 66% of respondents think analytics can revolutionize their firm, yet only 13% think their business has fully developed analytics skills.

Businesses should strive to employ cloud computing to maximize the potential of their data in order to better data analytics. In the next three to five years, 56% of the industry professionals polled want to employ the cloud to facilitate analytics. The previous few years have seen a significant improvement in internet accessibility on oil rigs, enhancing rig employees’ quality of life and enabling cloud-based solutions. Scalability offered by cloud computing is unattainable before digitization.

Companies may access a wealth of information by using the cloud as the primary component in data collecting, storage, analysis, and archiving. Utilizing the cloud can also aid the business’s attempts to protect its digital assets. According to IT industry analysts Gartner, cybersecurity services hosted in the cloud will see 60% fewer security incidents than those in conventional data centers. The fact that your information is stored somewhere far away may lead some people to believe that cloud computing is less safe, however this isolation actually increases security. Cloud-based security makes it more difficult for intruders to get inside because there is no physical access.

The Upstream Oil and Gas Digital Trends Survey highlighted several significant trends, one of which was the biggest percentage growth in investment in robotics, wearable technology, and artificial intelligence over the next three to five years. More process components may be automated thanks to these kind of advancements, which will also increase productivity and efficiency. However, big data/analytics and IoT will see the biggest expenditures in digitalization. More and better data will be gathered and stored in the cloud, enabling better data analytics, as wearables and other IoT-related technologies become more widely used.

The Upstream Oil and Gas Digital Trends Survey highlighted several significant trends, one of which was the biggest percentage growth in investment in robotics, wearable technology, and artificial intelligence over the next three to five years. More process components may be automated thanks to these kind of advancements, which will also increase productivity and efficiency. However, big data/analytics and IoT will see the biggest expenditures in digitalization. More and better data will be gathered and stored in the cloud, enabling better data analytics, as wearables and other IoT-related technologies become more widely used.

By enabling managers to track employee risk, wearable technology and the capabilities unleashed by the cloud can significantly increase worker safety. When properly utilized, the data that oil and gas businesses gather can greatly enhance every part of an operation.

The fact that contractors make up the bulk of employees in the oil and gas sectors frequently presents difficult people management issues.

Workers must be brought up to speed as rapidly as feasible in the current economic climate to prevent productivity loss. The hazardous nature of the task involved is another difficulty. Making sure contractors have the proper health and safety training is crucial because the US oil and gas extraction business has a death rate seven times greater than that of the ordinary US worker. Contractors may complete much of this training before they even step foot on the rig thanks to new digital orientation tools, saving crucial time.

The use of identity capture technology assures that each employee has successfully finished the online orientation procedure, which is crucial for a job as potentially dangerous as oil and gas extraction. Supervisors also struggle to keep track of their workforces, but training management software enables them to guarantee that every employee has the most recent training and credentials.

In order to enhance operational efficiency in the wake of the price crash, oil and gas corporations adopted innovative technology. After the most recent meeting of the Organization of the Petroleum Exporting Countries (OPECinfluential )’s members, during which the group discussed potential steps to further tighten oil markets, the industry has recently experienced a resurgence in optimism.

Although prices are moving in the right direction for the oil and gas sector, the technological advances made in the years after the price drop should be kept in mind as the sector strives for long-term viability.

In order to become “digital technology firms,” oil and gas corporations should keep embracing and funding technological advancement. In the era of big data and analytics, oil and gas businesses have the chance to once again lead their sector in the application of digital technologies.