When developers are asked to build a mobile application, react native mobile app development company has always been their preference. Have you wondered why? Let us, deep dive, into its key reasons. 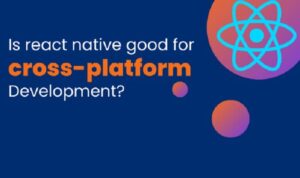 In this contemporary era, you might want to implement a simpler technology. Native app development technology should not be your priority. This will not allow you to maintain consistency between Android and iOS platforms. Native development hinders developers’ iteration time and has a comparatively slower development cycle.

The need for building cross-platform apps has increased over years. This is because cross-platform applications do not require the hassle of developing different applications for different platforms. Thus, the cross-platform development approach increases marketability and reduces time and cost. Also, reusability of code is possible. This reduces the workload of developers and allows them to be more productive. To build such apps, developers can employ various extensions and plug-ins using single-source code. This enhances the functionality and scalability of the app.

Are you doubtful about choosing the right framework for your next cross-platform app? React Native app development should be your one-stop solution. Let’s start with the basic overview of this framework.

What is React Native

React Native is the open-source JavaScript-based framework, introduced by Facebook. The framework combines the best-in-class JS library with some components of native development. Developers can use JavaScript to build cross-platform Android and iOS applications. It is different from other JavaScript cross-platform frameworks like Titanium and PhoneGap. This is because the resulting UI application is completely native. While using React Native, developers can get rid of challenges associated with HTML5 UI-based applications.

React Native app development allows developers to execute React programming models. This implies they can create a native app with the same components of UI. Cross-platform apps built with React Native are visually the same as that of a purely native app. The only difference is that developers can integrate UI with JavaScript rather than traditional Java, Swift, or Objective-C.

Every app is different in its design and feature set. This can influence the amount of platform independency that a user may require.

Which category of apps can be built with React Native?

1. Development of apps is simpler

React native is used to build native applications for android and iOS. React native technology demands the compilation of native code. This implies that the app can be operated in both OS. Thus it functions, in the same way, as a native application. Developers need to acquire the skills and knowledge of Javascript. Companies try to avoid the complexities of hiring two separate teams of developers for iOS and android. If you are also stuck with this issue, react native app development should be your only solution. Still confused? You can get in touch with the team of 4-way technologies for your next app.

2. Strong support from the developer community

The community of React Native actively supports this framework by adding different tools to open source. Even though some of the features are written from the start, native features can be accessible from the app package. You can also interact with community members in the stack Overflow to resolve your doubts. For code-related issues, the developer can check the open issues in the main repository. You can also use the report template for creating issues.

Building applications with React native can be user-friendly for users and even convenient for developers. For react native, the learning curve is smooth as developers do not need to be experts in complex programming languages. They should have a fair understanding of functional programming and JavaScript. The strong and supportive community also eases the learning path of a developer.

React native app development for building apps is cost-effective since you can rely on a single developer team. React native is an open-source framework developer can reuse native components. This choice can save a lot of time for developers. It can also give a customized look as per your requirements. You can ensure the quality of the mobile app without any extra effort or time. React native app development companies render a time-saving benefit of MVP. This reduces the duration of app marketing.

Debugging is easier with React Native app development solutions. Fast Refresh is a feature of React Native that allows developers to get immediate feedback for the changes in React components. It is also helpful for debugging apps. It enables the option of Fast Refresh. React native technology demands the compilation of native code. This implies that the app can be operated in both OS. thus it functions, in the same way, as a native application. Fast refresh is available by default and developers can toggle ‘Enable Fast Refresh” in the menu option. All the app edits are visible in a few seconds.

Updating native apps becomes a tedious task. Users need to take the approval of Apple and Google for the updates. The code-push feature of React Native app development can simplify the app update process. Code push is available in React Native and Apache Cordova. With this feature, the app is automatically updated during the runtime. Users don’t need to go through the hassle of launching mobile applications.

The in-built library of React Native allows developers to be creative in their app-building process. They can use the UI components from the library for free. For developers, the app development path is much more fun and exciting. For example, if you like minimal designs, you can visit the TeaSet UI component. It has more than 20 native JavaScript ES6s components. They can also use NativeBase through a web online platform. It has 40 components such as menus, breadcrumbs, popovers, spinners, and sheets. This can render a native look to your app.

Lastly, with React Native, you can get the benefits of cross-platform development. This should be your foremost reason to select React Native over other frameworks. You do not want to put in extra effort and cost for two OS differently. Developers using React Native use a single codebase for developing apps for both OS.

React native can be your cost-effective solution with decent performance and UI-UX requirements. If you have different frameworks in mind to meet your diverse requirements, react native should be the ultimate stop. They are effective, fast, and relatively easy to learn.