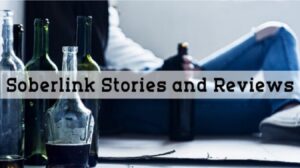 My alcohol addiction peaked in 2017. It took a toll on my health and relationships. After attending a 30-day rehab, I began to embark on the road toward sobriety. Some success and some failure marked the beginning of this road. Then one day, a friend suggested that I get Soberlink. I was hesitant at first, not wishing to appear reliant on technology to stay sober. But because I had already relapsed, I was ready to try anything. Soberlink was much easier and more discreet to use than I had initially thought. I assigned people I trusted to be accountability partners, and they received the text messages from Soberlink notifying them of the test results. Knowing I had upcoming tests helped me to remain sober each day. After being sober for a year or so, I was in court gaining custody of my kids from my ex-wife who was addicted to drugs. My former alcohol abuse was mentioned in court, and I was able to provide the Judge with an official Soberlink report for the previous year showing that I had indeed been sober. The court accepted the Soberlink report as official evidence, and I got custody of my children. I am very grateful to Soberlink for helping me get sober. I recommend Soberlink to anyone struggling with Alcohol Use Disorder.

Soberlink Review 2: Only Device that Kept Me Accountable

I tried to quit on my own for years to no avail. My family was really down on me with near interventions. I had been to intensive outpatient programs, yet I still drank. I did 90 in 90 at AA, but the one thing that worked was Soberlink. I knew that if I drank, I would be caught, which meant inpatient programs that I dreaded. I’ve been sober now for two years and recently finished using Soberlink. My advisor suggested I still attend AA, which I am happy to do!

Soberlink gave us insurance during parental visitation. We have custody of a child who has been through things no child should go through. Her biological parent had a court-ordered visitation when she had a car accident with our child in the vehicle. The parent refused the breathalyzer and as a result, went to jail. Our child was scared but physically ok suffering only a couple of bruises. After going to court, the visitation needed to resume. So, the magistrate, attorneys, and guardian ad litem strongly suggested Soberlink. I was skeptical at first and felt this was just another way to get our case out of the courtroom, giving her a slap on the wrist. But being in recovery for over seven years, I trusted this part of the system and paid for the device and service. It worked! It tested for alcohol 12 hours prior and at the end of the visit, assuring us she was not under the influence during any scheduled visitations. If she didn’t use the device, we had every right to cancel the visit without being in contempt with the courts. Peace of mind was something we needed during this 6-hour time frame, and that’s what we got. The courts and my attorney believed in Soberlink and now I do, too.