Take a look around at the world we have created. Even breathing fresh air is a potential difficulty down the line. Carbon emissions may be another big issue plaguing human civilization along with pollution. Thus, we must compulsorily learn more about undoing the damage as much as possible. One such way is aiming for a zero carbon city. You must know that about 500 cities across the world have already achieved their goals of lower carbon rates and net-zero carbon emission objectives.

If you delve into the details, you will know that achieving a net zero carbon city is not as problematic from a macro level view as building awareness. Citizen education is the biggest hurdle law enforcement and environmental authorities face today. Of course, there will always be science and environmental agencies that will contribute towards spreading awareness and issuing mission statements. However, it is our job as citizens to strive towards achieving a net zero carbon city where emissions are non-existent. 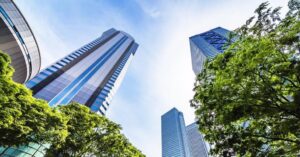 What To Do to Achieve Net Zero Carbon City?

A group of scientists have laid down as many as seven policies that may help achieve a net zero carbon city. They focus primarily on sectors such as transportation and the energy industry, along with construction and building, food and consumption, and other sectors, for lowering carbon emissions.

As per the experts, several global cities have transformed their methodology when it comes to tackling climate change issues. These cities have already embarked on the path of net zero carbon emissions. At the same time, an alarming statistic indicates how close to 75% of global cities are already in a position where it is impossible for them to even think of becoming a completely zero carbon city. Therefore, a few remedial measures might be taken in this regard, such as –

These basic steps will help any urban city to transform into a zero carbon city in the long run if implemented correctly. Citizen awareness programs should also be high on the agenda for Governments and law enforcement authorities across various countries. Reducing pollution is always possible with concrete steps and efforts by Governments, public and private sector organizations, and the citizens themselves. Several cities can consider steps like limiting conventional construction techniques and emphasizing green buildings and sustainable building materials. Some can also take steps to lower emissions by ensuring higher incentives to facilitate switching to using electric vehicles. This can be done in the form of offering discounts, incentives, and other freebies. This will bring about a major mobility shift while ensuring lower emissions overall.

Solar power and other sustainable sources should be encouraged, with customer discounts. By lowering emissions, cities can adopt eco-friendly ways of life. There should also be electricity usage for transportation, from electric buses and trams to metro railways. Phasing out older and polluting commercial and goods vehicles should also be a priority for Governments worldwide. These are only a few steps. Cities should lay out the roadmap for a greener and cleaner future through consultation with experts and leading scientists while also taking the responsibility to spread awareness amongst the public.