How Blockchain in KYC Verification has Transformed the Banking Industry?

Blockchain technology has shown colossal growth in recent years. Its worth in every realm has proven to be impressive. Various banking and financial institutions have utilized this technology in its early stages and have experienced tremendous results. It has the capability to transform the mechanism of doing business globally.

Blockchain’s application has been in raising funds, rapid payment systems, straightforward clearance and settlement systems, providing secure loans, and so on. The list does not end here. The most important implementation that has raised the expectations is the blockchain in KYC verification. KYC acts as no less than the spine of the banking industry. 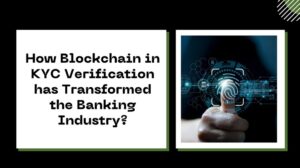 Banking is a well-established and trustworthy business, where people deposit their hard-earned money. Much confidence is required to keep safe your money in such entities. There have been various money laundering cases subjected to such financial institutions. Money laundering is the process of converting illicit money into a legal one. The appearance of such instances has become quite successive now and eventually becomes crucial to eradicate these malpractices.

Besides this, there are several other issues that require clear-cut focus. Everything related to these issues will be beautifully explained in this article.

Need for KYC in Blockchain

KYC was introduced to curb any form of fraudulent activities against the banks. The customer’s details are taken before opening the account or applying for loans in such entities. A massive amount of money was infused into making KYC procedures superior. The prime objective was to make the system non-hackable and error-free. But still to this point, the efficiency has continued to deteriorate.

To minimize the sluggish and work-intensive tasks, the usage of blockchain in KYC is considered to reduce duplication and any fallacy threat in the system. It is also assumed to provide top-level monitoring operations. The banking sector is looking forward to brief, exciting and varied results to create an enjoyable experience for the customers.

Besides this, to make the system fully intuitive and advanced, several financial firms are trying to integrate coherent and AI-enabled technologies.

Before moving further, let’s get into the basics!

What is KYC Verification in Blockchain?

It is understandable that the data residing in the blockchain network is unchangeable. So, great transparency is maintained that enhances the trust of the people at every level. Now, all information corresponding to the ID details of individuals is stored in the databases.

The blockchain in KYC verification is responsible for the authentication of the users genuinely and swiftly. This facility has encouraged various government and private firms to incorporate their data completely on this cryptographic ledger.

The permission to use data is completely dependent on the user. This technology works in the way the user needs to log in to the system. This is done via a one-time password by dispensing out a private key to every data. But the third party can have access to the whole data but the possession remains in the hands of the user. The steps involved in the process are shown as under;

There is a one-time procedure that is performed by the banking institution to set up a KYC platform based on blockchain. Every detail is filled with sheer care and then is uploaded to become available for verification. It means that the information is attainable to FI1.

On the execution of any transaction with FI1, the right to access is provided to the users. Then verification takes place and the replica of the data is stored on the server. After that, a hash function is transferred to the DLT Platform. If by chance, the hash function data does not match with the one posted on the DLT platform, then there will be a warning notifying the sudden change.

Here, the user is asked by FI2 to perform KYC, the access to the user profile is initiated. The KYC data is then reviewed with the KYC data and hash function. If both of them resemble then it means that FI2 is the same as obtained by the FI1.

Advantages of Blockchain Solution in KYC

Everything related to the data adjustments is well tracked and monitored on a real-time basis. All the details are stored digitally. Hence, the paperwork is drastically eliminated. Besides, the turnaround time is also reduced via KYC blockchain software solutions. Direct access to the users is granted that saves the overhead time.

The decentralized feature provides access to the parties after authorization is provided to the users to gain access. The data is spread evenly across the  industry. Beyond this, the system offers data protection for the users thereby annihilating the unaccredited access.

Whenever any form of KYC transaction takes place, the data is shared in the distributed ledger. Now,  the financial institutions that form a part of the network are readily updated, upon any modifications, notifications are issued to alert the members.

The ability to incorporate the unhackable features into the system attains security. But on the contrary, it can also make the network slow. But blockchain technology comes with the attribute of reducing the effort and maintaining the efficiency. The customer’s onboarding time is accelerated while the expenses are reduced.

The assembling and processing of the information consume a lot of time and cost during the KYC process. Barring a few resources that are some, which are available for surveillance and analyzing user behavior for irregularities. The modernized data with the help of the best blockchain technology company in KYC has quick user access which reduces the time required due to intense activities. In exchange for this, users are busy looking for solutions to complex KYC challenges.

Leveraging its applications with artificial intelligence and other ultra-modern technologies, one can bridge all the gaps that show inconsistency.